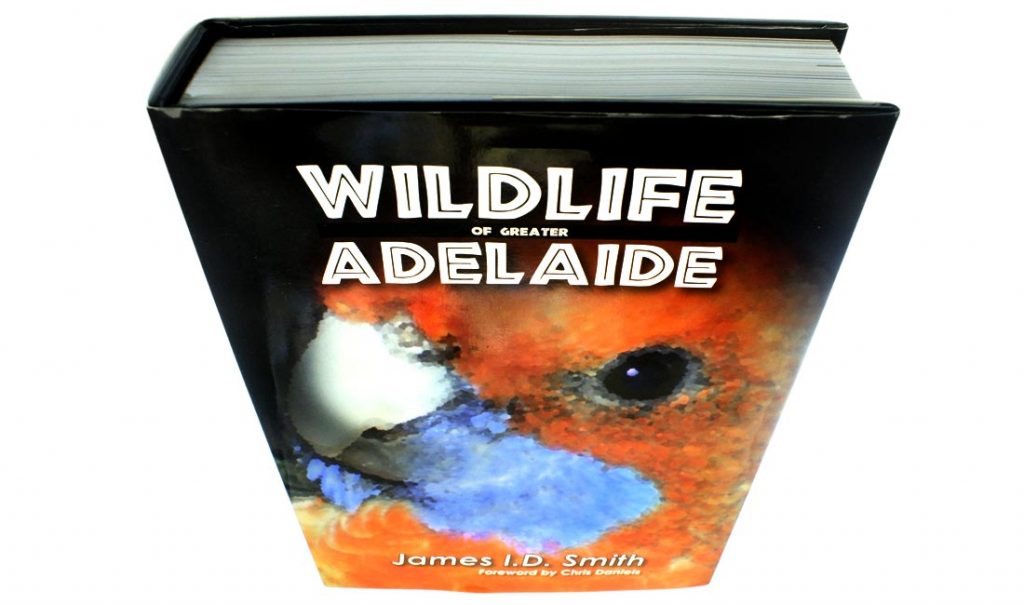 Copies of Adelaide’s first comprehensive wildlife guidebook, the Wildlife of Greater Adelaide, arrived in Axiom Publishing’s warehouse this week! This is a momentous occasion for all of us who worked on this magnificent tome, but especially so for author James Smith.

When he’s not writing wildlife guidebooks, James works at the SA Museum’s Discovery Centre where he identifies specimens for the public, educating them on their finds and inspiring others to learn more about our local species. James also runs fauNature, a company dedicated to assisting people in attracting and engaging with local wildlife.

James Smith was enthralled by animals from a young age, as are many biologists including this book’s co-mastermind, Professor Chris Daniels. James trained as a zoologist and work and personal interest has led him to seek intriguing wildlife across Australia and the globe. He is committed to understanding urban ecology, another passion he shares with Chris Daniels, and sharing that knowledge with the broader community interested in attracting wildlife to share our space.

James and Chris first discussed the prospect of creating Adelaide’s own comprehensive wildlife guide book eight years ago. It’s fair to say that neither of them could have imagined the monumental task ahead of them nor the incredible product they would end up with. The Wildlife of Greater Adelaide is over 450 pages, with 11 chapters on identification and includes a staggering 468 species accounts.

James had been impressed by the detailed field guides produced in other states, particularly the Wildlife of Greater Brisbane, and realised that Adelaide needed its own. In his own time and with only some initial financial support from the Barbara Hardy Institute at UniSA, James scoped the task – and it was a big one!

James sought advice from experts to decide which of the many species of animals in the region to include in the book. To develop a species list, he engaged with many authorities in South Australia, from specialists in small groups of animals to the state’s leading ecologists. He listened, discussed, debated and reviewed their contributions and ideas. These experts then supported, reviewed and polished his text concerning ‘their’ animals. This book therefore is a selection of our wildlife formed from those connections.

Working out which animals to include in the book was only part of the challenge facing James. Such a large project would require significant funding – and this is where Chris Daniels came in with his broad connections within the Adelaide wildlife and environmental community. James and Chris worked tirelessly, securing substantial financial and practical support from the Barbara Hardy Institute, the Adelaide and Mount Lofty Ranges Natural Resources Management Board and the South Australian Museum. Other organisations, including not-for-profits, came on board including Nature Play SA, Nature Foundation SA, the Scientific Expedition Group (SEG), BirdsSA, Inspiring South Australia and the Field Naturalists Society of South Australia.

When it came to sourcing photographs of all the species to be included in the book, James, again with help from the Barbara Hardy Institute at UniSA, engaged renowned photographer John Hodgson to start to create a collection. For more than two years, John photographed the vertebrates and invertebrates from across the Greater Adelaide region. Photographs of many of the live specimens resulted from two ‘Bring Us Your Bugs’ days at the SA Museum. John photographed hundreds of specimens brought in by thousands of avid collectors keen to support the book. Even after these efforts, not all species were represented and James obtained the remaining photographs from amateur and professional photographers in natural history clubs, societies and organisations across the state. Hence, this book is more than a field guide – it is the first comprehensive photographic record of living animals from the region.

The Wildlife of Greater Adelaide is truly a team effort, created by enthusiasts who are so enamored with our backyard wildlife. It is the result of remarkable people, organisations and a community working together to produce our own guidebook that we can all be hugely proud of.

About the Author: admin